Puppy Throwing Up — Causes And Treatment

Few things in dog parenthood come close to the horrifying sound of your pup hacking, heaving, and retching or the sight of her tiny stomach contracting over and over again. Is the little tyke coughing, choking, suffocating, spewing out her organs?

When your pup is throwing up, it can sound and look very painful— and it is. Granted, vomiting is as common in dogs as in humans (maybe less, thanks to their non-alcoholic diets). It doesn’t matter if you’re spoiling them with the best puppy food or keeping an eagle’s eye on their scavenging snouts while out on walks— it’s bound to happen every now or then.

But your young puppy throwing up is a little more cause for concern. Since their immune systems are still developing at this age as they complete their vaccination course, they’re prone to more illnesses. Hence, vomiting could be indicative of an underlying disease.

So, when should your puppy throwing up food set off your alarm bells? Moreover, what should you do to help soothe your pup immediately after, and when is it time to ring up the doctor? Let’s find out.

Is Throwing Up Normal In Puppies?

Puppies are always exploring the world and will likely ingest a few undesirable things. So, a few sporadic vomiting episodes are pretty run-of-the-mill. Switching them to a bland food diet for two days is all it takes to help them recover.

However, when vomiting is accompanied by other symptoms and persists day after day, it might be time to take more serious action. You’ll know you’re due for a vet visit when:

Throwing Up vs Regurgitation

Sometimes, it may seem like your puppy is throwing up when she’s actually just regurgitating.

Regurgitating is a passive motion that throws out food content from the esophagus that didn’t fully make it to the stomach. It’s like when babies spit up food; there’s no retching or gagging; it’s like someone pressed the “eject” button, and the undigested food plops right out, sometimes accompanied by coughing. It’s not uncommon for a little bit of water to come out as well.

On the other hand, vomiting involves forceful and painful contractions of gut muscles to expel stomach contents.

The reason that your pup regurgitates is essentially that the chewed up food is unable to make it to the stomach. There can be several reasons behind this, both medical and non-medical:

The Causes of Acute Vomiting in Puppies

Acute vomiting in puppies refers to sudden bouts of vomiting that are one-off. For example, your pup may vomit a few times in succession, and maybe a few more over the next 24 to 48 hours, but then they’re done.

The usual suspect for acute vomiting is the ingestion of toxic materials. This could include scraps from the trash, rotting bones along the sidewalk, or a helping of delicious-yet-toxic-for-dogs chocolate cake.

However, there could be other reasons behind acute vomiting as well, and the list is long:

Acute vomiting is typically self-resolving and does not require you to rush your pup to the vet. As long as she stops vomiting and returns to her regular diet within two days, neither of you have anything to worry about.

The Causes of Chronic Vomiting in Puppies

If your puppy’s vomiting episodes have become more frequent and persist for longer than 48 hours, then there is some underlying health issue at play. As such, chronic vomiting can be symptomatic of:

Chronic vomiting can be extremely draining for your pup- no pun intended. Frequent vomiting leads to an empty stomach, which is why you’ll notice that your poor pup is only expelling yellow bile.

Luckily, however, most of these symptoms are treatable. The key is nipping the problem in the bud and diagnosing the illness as early as possible. For this reason, chronic vomiting in puppies demands that you schedule a vet visit so that your vet can identify the problem. 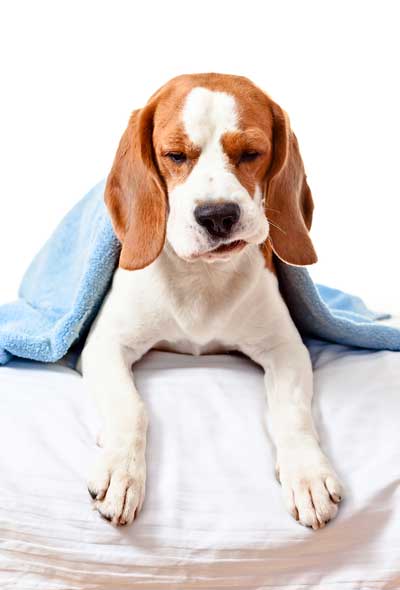 Diagnosis And Treatments For Puppy Throwing Up Food

Diagnosing the underlying cause behind your puppy’s vomiting will involve your vet taking down a detailed patient history. This includes your pup’s vaccination status, travel history in case she picked up a bug on the road, medication history in case certain medications are causing nausea, and so on.

It also involves giving a detailed description of the events leading up to the vomiting episodes. You might also be asked to describe the contents, consistency, color, and smell of the vomit, so be observant!

If necessary, your vet might run some additional tests such as blood work, stool and vomit samples, endoscopic evaluations, urine tests, ultrasounds, or x-rays.

If the cause behind the vomiting episodes is some chronic health issue, your vet will start your pup on an appropriate medication course. In the meantime, you need to change up your pup’s regular diet.

Your puppy’s diet is a huge part of her recovery. You need to switch to frequent feedings of small amounts of a bland, easily-digestible diet to give your pup’s gut a break.

What Should You Do After Your Pet Vomits?

You should spring into action the moment you hear your pup throwing up. Here is a step-by-step guide on how to handle your puppy throwing up:

How to Inspect Puppy Vomit

Inspecting your puppy’s vomit is essential for diagnosing the underlying problem and determining whether or not it was a one-off thing. Hence, you need to know what to keep an eye out for.

Here are a few indicators of your pup’s vomit and what they could mean.

Throwing up is as common in puppies as it is in human babies, and it is equally a cause of concern. It is not a diagnosis within itself but rather a symptom of some other hidden problem.

While an isolated vomiting episode or two is quite typical, long periods of throwing up should be taken more seriously. This is especially true if they are simultaneously experiencing other symptoms as well.

This is why the rule of thumb is to take your puppy throwing up food seriously and consult your vet at the very least. When it comes to puppies, there isn’t such a thing as being too careful.

Get up to date information on how to take care of your puppy, as well as events we host and see the newest puppies we get in our store!